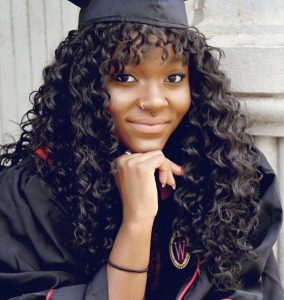 Ashanti is originally from Milwaukee, WI but studied at UW–Madison where she double majored in Psychology and German. Her focus in undergrad was childhood development and family studies, the German part was influenced by her heritage and upbringing – she has been speaking German since she was 3 years old. She does plan on enrolling in graduate school to continue her education in Psychology. Ashanti’s goal is to have a Master’s Degree or Psy.D in Child/Clinical Psychology and serve underrepresented communities. In the meantime, she has been working with children since graduating from UW–Madison. She was a teacher at the Montessori center, Bright Child Learning Center, before she took on her admissions position. Before being a teacher, she worked for the nonprofit organization College Possible as a college coach. She also worked as a youth counselor at St. Joe’s Home for Children, an emergency shelter for children. In short, he passion is the wellbeing of children and navigating family dynamics.

She is a proud first generation, Black woman that comes from a low-income family on the north side of Milwaukee. College was always a goal of her and she was heavily supported by her family, especially her parents, but they had no knowledge of college nor the funding to get her there. That’s why she is forever grateful to the PEOPLE Program and College Possible for taking her under their wings and guiding her through the college process. She is a successful PEOPLE Scholar and College Possible Scholar.

Ashanti has two dogs whom she love as if they were her own children. Her Cavapoo is a boy and his name is Maxbii (Doots), and her Cavachon is a girl and her name is Rubii. She has a special connection with Doots, because he is her Emotional Support Animal (ESA). She got him years ago after battling with a lot of emotional and mental health issues, and he has been Ashanti’s rock ever since. She got Rubii during the quarantine to keep her and Doots company and she honestly don’t know how she and Doots have lived so long without her. They are the perfect family! Ashanti eventually wants to have human children, but her pups will always be her first babies.

When she came to UW–Madison, Ashanti was so sure that she wanted to be a pediatrician. She didn’t just want to help children, she wanted to save and protect them. For two years, she was a pre-med student majoring in Psychology and German, but  Junior year, she realized that she wasn’t passionate about medicine at all and she wasn’t passing her Chemistry classes anymore. She dropped her pre-med coursework, then eventually withdrew from school that year to really focus on her mental and emotional health.  Ashanti needed time and space to get herself back on track. Changing her major focus and taking time away from school were the two best decisions she made in college. At the time, She was so afraid that she was making the wrong choices and setting herself back, but she came back a stronger, more clear-focused student because of her choices. She learned that everyone’s educational path is different and she accepted her own path. Ashanti graduated from UW–Madison later than she had originally planned, with a different career goal, but she was proud and determined.